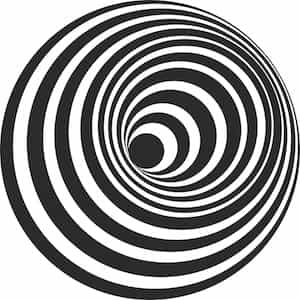 Into a Black Hole

Another form that stars can transform at the end of their lives is a black hole. The simplest definition of a black hole is an object that is so dense and tightly packed with matter that not even light can escape its surface. Black holes are the only objects in the universe that can also trap light. They get formed when a massive star collapses in on itself, becoming so dense that it bend and distort the fabric of space and time. Billions of billions of earth can go into a black hole and convert to nothingness.  A black hole is such a strange thing in this universe that even time stops there inside a black hole. Black holes are what occurs when the universe divides by zero and consumes anything that tries to notice. Black holes happen when you put too much matter in one place, and it breaks both the matter and the place with gravity. Black holes eat everything around its gravitational pull and suck the matter from nearby stars. 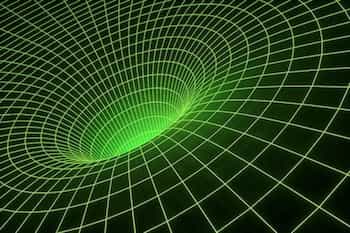 What is Escape velocity?

In physics, Escape velocity is defined to be the minimum velocity an object must have to escape the gravitational field of a massive body, that is, in our case can escape the earth without ever falling back. There are two things that affect the escape velocity, the mass of the object and the distance to the center of that object. For example, a rocket must accelerate to 11.2 km/s almost 40,000 km/h to escape Earth’s gravity. If we shrink the Earth’s mass into a sphere with a radius of 9 mm, the escape velocity would be the speed of light. The radius at which a mass has an escape velocity equal to the speed of light is called the Schwarzschild radius. Any object that is smaller than its Schwarzschild radius is a black hole. You can say that anything with an escape velocity higher than the speed of light is a black hole. For becoming a black hole the mass of our sun would need to be pressed into a volume with a radius of about 3 km. Similarly, If you could squeeze the Earth down to the size of a marble tile, it would collapse on itself and become a black hole. 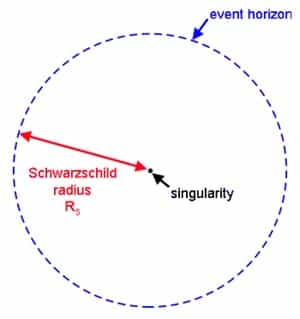 What is Event horizon?

There are two fundamental parts to a black hole: the singularity and the event horizon. The event horizon is the “point of no return” encompassing the black hole. It is not a physical surface, but a sphere enveloping the black hole that marks where the escape velocity is equal to the speed of light. Once any stuff is inside it, that stuff will fall to the center. With such a strong gravity, the matter squeezed to just a point. That point is called the singularity. It is extremely small, so it has actually an infinite density.

The black hole in our galactic center is thought to have a mass of 4 millions suns and diameter of 17 million Km. Such black holes are like hubs around which many galaxies including our milky way rotates. So actually all stars and galaxies are rotating around giant black holes. O humankind these are actually knots your Lord has put there in the fabric of space and cosmos which keep it tight and balance against the expansion of the universe.