Religions Have Come To Give You Freedom. Who Will Go In Paradise? God Of Abraham Is The God Of Hindus And Budhs.

And man says, “What!- When I am dead, will I be brought forth alive?”

Does man not remember that God created him before, while he was nothing?

So by your Lord, We will gather them and the devils, then We will bring them around Hell bent on their knees.

Then surely, We will drag out from every sect those of them who were worst in rebellion against the Most Gracious.

Then surely, We know best those who are most worthy of being burnt therein.

And there is none of you except he will come to it. This is upon your Lord a decree inevitable.

Then We will save those who feared God and leave the wrong doers therein bent on their knees.

And when Our clearVerses are recited to them, those who disbelieve say to those who believe, “Which of the two groups is better in position and best in assembly?

And how many a generation We have destroyed before them who were better in possessions and appearance?

Say, “Whoever is in error, then the Most Gracious will extend for him an extension until, when they see that which they were promised – either punishment or the Hour – then they will know who is worst in position and weaker in forces.”

And God increases those who were guided, in guidance, and the enduring good deeds are better to your Lord for reward and better for recourse.

Then, have you seen he who disbelieved in Our verses and said, “I will surely be given wealth and children [in the next life]?”

Has he looked into the unseen, or has he taken from the Most Gracious a promise?

No! We will record what he says and extend for him from the punishment extensively.

And it is We only Who shall inherit what he says belongs to him, and he will come to Us, alone..

And they have taken besides God false deities that they would be for them [a source of] honor.

By no means! They will reject their worship of them, and become opponents to them.

Do you not see that We have sent the devils upon the disbelievers, inciting them to [evil] with [constant] incitement?

So do not hurry against them. We are counting for them a countdown.

On the day when We shall assemble the righteous towards the Most Gracious, as guests.

And drive the guilty unto hell, a weary herd

None will have the power of intercession except he who has taken a covenant from the Most Gracious..

There is none in the heavens and the earth but will come to the Most Gracious as a slave.

He knows their number and has counted each one of them.

And all of them are coming to Him on the Day of Resurrection alone.

Indeed those who believed and did good deeds – the Most Gracious will appoint love for them In the hearts of other creation.

And how many have We destroyed before them of generations? Do you perceive of them anyone or hear from them a sound?

Religion Is One For All Of You. Religion And Superstition. 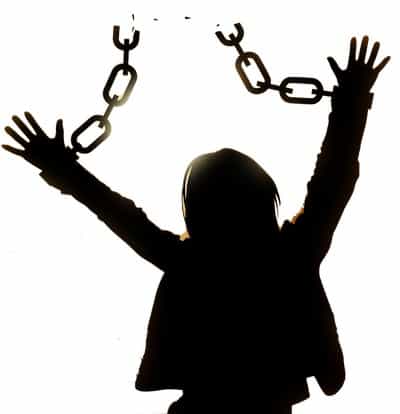 O People I know Jews say that they are the chosen one, Christians say that they will be the only one and same is the view of Hindus, Buddhists Muslims and all others about themselves. Have they taken an oath from your Lord or they say that about which they have no knowledge.

O mankind your Lord is one Lord and Religion is only one for all of you that is submission to The Only One The Almighty The All Wise. Religion and scriptures have come to you to give you liberty from many gods, idols or humans, to break the chains, to give you liberty from superstition so that all your fears come to an end. So that you need not to go to different places to different doors for your problems for your provisions for your needs. It has not come to make you superstitious and irrational or to make you like a beggar knocking every other door and asking everyone for your needs. Your clerics your knowledgeable people among you in the past and present know very well in their hearts that they did this intentionally to get a little benefit of this world but in hereafter they will have a painful punishment.  All those religious clerics and your leaders are criminals as they make people go far way from God. 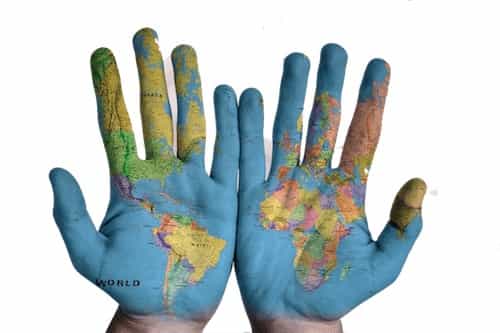 O people your Lord is the light of heavens and the earth and All Knowledge. Your Lord had taken promise from the souls of Adam’s offsprings before their creation to be on the straight religion of submission to God alone. This is the instinct, this is the bases of human morality the instinct of right and wrong which is not there in animals. Thats why there is no single true religion on earth at the moment which says that taking life of a human being without any reason is good, or stealing or robbery is good.

Which Religion’s Followers Will Go In Paradise

Who Will Enter Paradise? 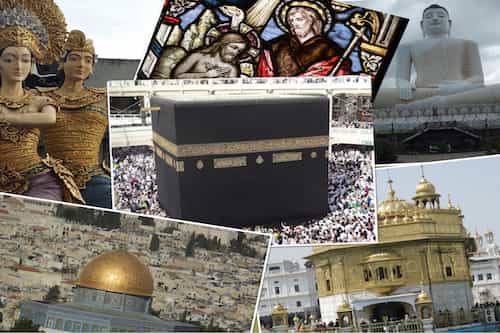 People ask if every religion’s folks thinks that they are on the right path than how will God judge on the judgement day. If there is only one right true religion out of these many than how could others be blamed of not following that true religion while they born and open their eyes in another atmosphere. The same is also a big argument of atheists since centuries that is  regarding the destiny of the nonbelievers, by which persons who have never even heard or got a chance to read a particular revelation might be harshly punished for not following its commands. I tell you how your Lord will deal with His salves on the judgement day.

How Will God Judge On The Judgement Day?

When a follower of some religion will come to your Lord and place his excuse that he was born to a family following a certain religion and throughout his life he didn’t get a chance to hear about that particular true religion or revelation or he paid no attention because he always thought himself on the right path. His plea will be accepted. Than your Lord will ask him if he acted upon what had been mentioned in his own religion and all of a sudden the whole scenario will change. All of a sudden the person will feel himself empty, his heart will stop beating. You can see that the main plea has just vanished. Most of the religious people only follows the rituals whether Jews, Christians, Hindus or Muslims. If the person was a wrong doer in his life he would be failed to pass that test. Which religion of the world says that killing a human without any reason is good, stealing or corruption is good, taking someone’s possessions unlawfully or hurting your brothers is good. Not a single religion says that. So the word of your Lord will be justified against him.

Its not one religion’s folks versus others who will inherit the paradise it is actually righteous versus wrongdoers. This would be the case of the one not following the true religion but is not an excuse of not knowing the truth or not following it or accepting it for personal gains or because of stubborn or unbending attitude.

Message For Hindus And Budhs 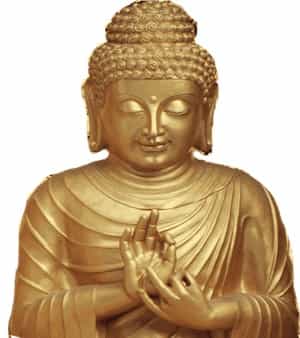 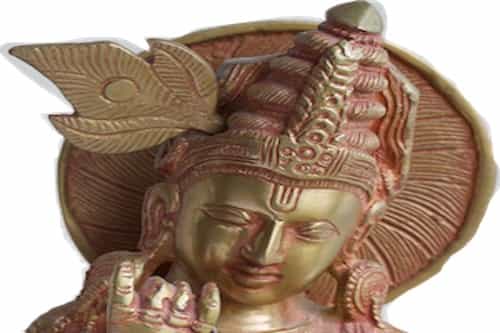 O you Hindus and Budhs you are such a big nation, I open my arms towards you. Trust me your Lord is only one God. God of Ibrahim, Musa, Ram, Krishna, Sidaharth, Jesus and Muhammad. God of Jews, Christians, Muslims and everyone else. Trust me than you will be rejoicing on the day when your Lord will establish the judgement. If you accept my words by the Grace of your Lord I can see you rejoicing in the hereafter. I love you so much and I cry for you. Why all of you human beings are divided like this This program got thousands of likes from you, I know that you are listening to me. I know that your intelligent minds have many questions but you have silenced those questions because you feel it is sin to think like this. Not only you but every single thinking mind has many questions whether a Jews, Christian, Hindu or a Muslim. They cannot digest many things present in their religions. They feels that religions are separate and logic and science are a different faculty. While your Lord is All Knowledge all rationale how can than His guidance and  religions be at an angle of 180 with science and logic. This is totally impossible.

Many say that Paradise Hell are all metaphors in religious scriptures and all is in this world. We only live once. We will not be resurrected and all we get is the reward of cause and effect in this world. Why people of this age have difficulty to digest hereafter. Be patient and bear with me if my Lord wills I will surely tell you the reality of your world, this world you believe and than I will tell you the reality of hereafter. I don’t believe in the sun the stars this earth my relations and even in my own existence as much as I believe in hereafter. There is not one percent increase in my faith if even the sky is ripped and all curtains from my eyes and conscious would have been removed. 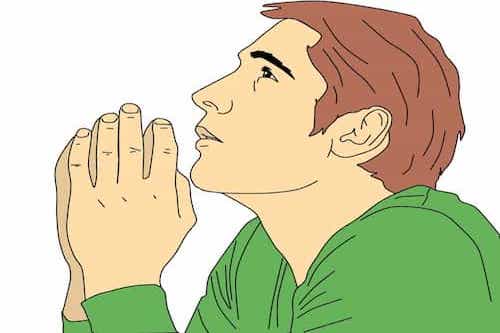 I will pray God my Lord and your Lord to take less accounts from all those criminals, killers, robbers those who are poor and in stressed situations, in countries regions where life is difficult and stressed. There are some among you who even kill their children sometime out of stress hunger poverty. How can a mother kill her children no by your Lord there must be something wrong in the towns. Where were the leaders, the rulers of that community when such things were happening. Don’t they have responsibility. By your Lord they will have a very severe account on the day of judgment. That day they will pray if they could return back and do good deeds. Corruption has appeared on the land and the sea because of what the hands of people have earned so that He may let them taste a part of what they have done so that they may return.

O people if we confess our sins, Your Lord is faithful and just to forgive us our sins and to cleanse us from all unrighteousness.

In the end I want to mention again what I mentioned before in first part of this program that  I know I have less command on language and on how to express. And that my speech is not very decorative and articulate and that I am also a very shy person towards camera. I have never come in front of camera like this in my life. I would not have done this all but how can I leave my fellow humans in this situation. Even now my first choice is to live and spend my life in isolation. In spite of all these short comings If my Lord Wills He Will put my love in your hearts and you will start loving me and will not think of living without me.