Skip to content
Sun in detail: Layers & Parts of Sun.TheLastDialogue 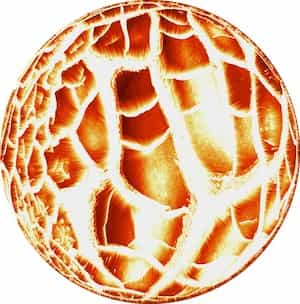 Now after understanding this come to the celestial bodies again. You already realized what a star is and that how big is our sun i.e so big that you can place 1.3 million earths inside sun. 695,700 km in radius. It has 5,538 degrees Celsius temperature at the surface and 15 million degrees Celsius in the core. Our sun is a little unique because it doesn’t have any partner. It’s just one sun surrounded by planets. But in the universe, solar systems have more than one sun. More than half of all stars are in multiple star systems. That means their solar system has two or more suns in it. Can you fancy having two or three suns in the sky at the same time? There are lots of planets throughout the universe where that is normal.

Out of these trillions of galaxies, every galaxy has almost 200 billions stars. Two hundred billion stars much bigger than our sun as our sun is a relatively small type of star. While despite being a smaller star it’s so big that it contains 99.86% mass of solar system, 149 Million Km away from Earth this small star converts 4.3 million tons of matter every second into energy and is doing this since last 4.5 billion years and still it’s burning. Sun rotates in 28 days same like the moon, Produces its energy by Thermonuclear Reaction Fusion combining smaller nuclei into heavy as I already told you in detail in Part17. Sun is not a solid body, so different parts rotate at different rates. At the equator, it takes 25 days and at poles 36 days. 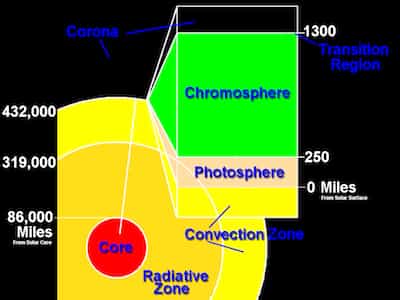 Sun has three main regions first is Sun’s interior which further consists of three parts Core, the radiative zone, and the convective zone, the second is Sun’s visible surface called photosphere, and third is Sun’s atmosphere which further consists of 3 parts Chromosphere, Transition Region and Corona. Core is the central region where all energy is produced. Fusion entirely stopped in 30% of Sun’s radius i.e up till Radiative zone. Temperature is about 15million celsius. Core starts from center till 0.2 Solar radius almost 139,000 km thick. The second part of sun’s interior is the Radiative Zone starts at the edge of the core of the Sun and extends up to about 0.7 solar radius almost 350,000 Km thick. Energy from the core bounces in this region & take 170,000years to get from core to convective zone. So it takes a photon, on average, 170,000 years to travel from the core of the sun to the surface. Then it takes just 8 minutes from the suns surface to your eyes. The third part of sun’s interior is the Convective Zone, starts at around 0.7 Solar radius and goes to the outer surface almost 180,000Km thick with temperatures up to 2million celsius. 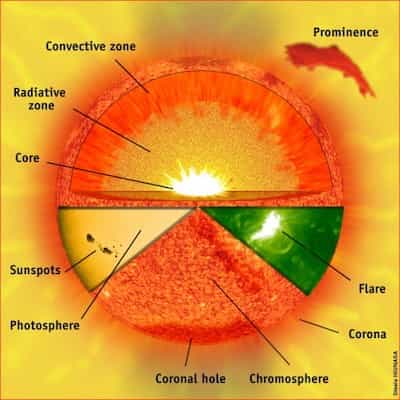 Photosphere is the visible surface of the Sun, the photosphere, is the layer below which the Sun becomes opaque to visible light. It is actually a boundary between the Sun’s interior and the solar atmosphere. It is 400Km thick with an average temperature of 5,500 Celsius. Now coming to sun’s atmosphere, the chromosphere is the lower region of the solar atmosphere and is about 400 km to 2100 km above the solar surface. The temperature varies about 3700 Celsius at the bottom and 7700 Celsius at the top, so it gets hotter if you go further away from the Sun, unlike in the lower layers, where it gets hotter if you go nearer to the center of the Sun. Corona is the uppermost portion of the Sun’s atmosphere and is much hotter than the Sun’s surface photosphere. The temperature in the corona is about 500,000 Celsius to a few million Celsius. The Corona cannot be seen with the naked eye except during a total solar eclipse. Starting at about 2100 km above the solar surface the upper corona gradually turns into the solar wind which is just an extension of the Sun’s atmosphere that encompasses all of the planets. Earth actually orbits within the atmosphere of sun.