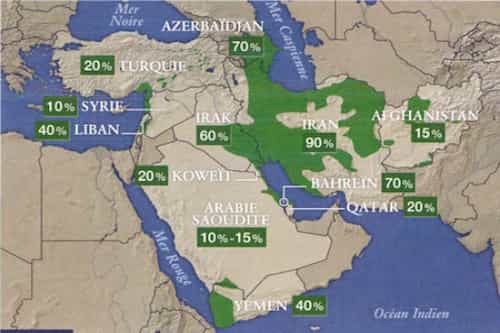 Now coming back to Shia Muslim sect origin and structure. Shia belief split many times in history over the issue of the Imamate. So all differences in Shias are because of differences in the line of Imamate. The largest branch is the Twelvers, then comes Ismailis and Fivers. Seveners like Qarmatians who are now extinct, Fatimids, and Druse all emerged from the Ismailis, and Zaidis are the fivers.

There was a fourth branch of Shias known as Kaysanites which are now extinct and believed in Muhammad ibn Hanafiyyah. Ali’s son but not from Fatima. After Karbala when Hussein and almost all family died and Ali bin Hussein Zainul Abidin adopted a life of worship and prayer Muhammad ibn al-Hanafiyyah became the visible head of the house of Ali. After Muhammad ibn Hanafiyya Imamate passed to his son and from him suspiciously to the father of the First Ruler of Banu Abbassid Caliphate. 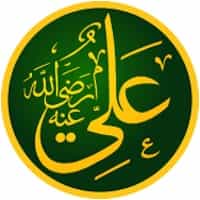 Twelver in Arabic Ithnaashariyyah is the largest branch of Shia Islam approx 85% of Shias are Twelvers. They also known as Imami or Jafari, originated from the name of the 6th Imam. They believe in 12 Imams who are spiritual and political successors to Muhammad. They believe in Isma عِصْمَة  infallibility of Imams and that they are divinely ordained Imams and chosen by Nass نصّ. That is chosen by a previous Imam on the direct divine order. Each Imam was the son of the previous Imam, with the exception of Hussein who was the brother of Hasan. The Last and 12th Imam is Muhammad al Mahdi s/o Hassan Askri who is now 1158 years old and is hidden in occultation since 874AD and will return as promised Mahdi just before the return of Jesus. 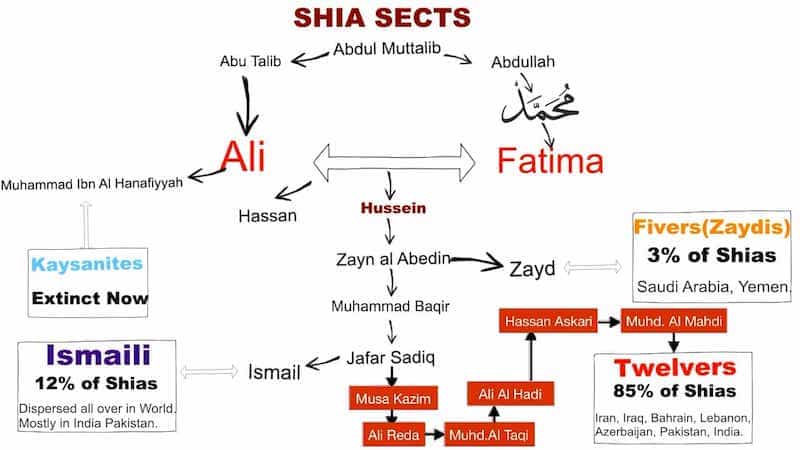 Twelver also called Imami Shia further divided into three groups Ghulat, Alevis and Jaffari. Ghullat mean exaggerators. Mostly they are extinct sects except for Alawites or Alawis. They are not even considered as Shias by Orthodox Shia groups. Mostly living in Syria 11%, Turkey and Lebanon. Founded by Ibn Nusayr during the 9th century, sometimes called Nusayris or Ansaris. After Ghullat lets discuss Alevis and Jaffaris. Second group Alevis also called Qizilbash, or Shiah Imami-Tasawwufi Tariqah, founded by a saint Haji Bektash Veli in the 13th century and found primarily in Turkey. Almost 20% of Population second to Sunnis in Turkey. They do not follow Taqleed towards a Marja. Marja literal meaning is the source to follow or religious reference. Marja in Shias is the highest religious position after Prophets and Imams. He has the authority to make religious decisions. Mostly it is Grand Ayatollah. Alevis are a mystical Sufi form of Shiaism and do not strictly follow Sharia Islamic Law and rituals. The third group is Jaffari.

Sub-sects and division within Jaffari Shias

Jaffari are further divided into Usuli, Akhbari, and Shaykhi based on differences in Jurisprudence. Usuli are the majority Twelver Shia Muslim group mostly in Iran, Pakistan, Azerbaijan, India, Iraq, and Lebanon. They believe in Ijtihad and Marja-i Taqlid. Maraji like Grand Ayatollah is the highest authority on religious laws in Usuli Shias. On the other hand, Akhbari rejects ijtihad in favor of hadith and say that the Door of Ijtihad was opened by Umar ibn al-Khattab after the death of Prophet and the Fourteen Infallibles Shia Imams never permitted Ijtihad. They also do not follow Marja and do Taqleed or Following of only Mahdi the 12th Imam who is in occultation. They are mostly residing in Bahrain, some parts of Iraq India and Pakistan. Shaykhi or Shaykhism 3rd movement in Jaffari Fiqh originated in 19th century Qajar dynasty in Iran by Shaykh Ahmed. It is a mix of Sufi and Shia Akhbari doctrines and are in much minority. Followers reside in Iran and Iraq. Many followers later converted to Babi and Bahai religions and broke from Islam. 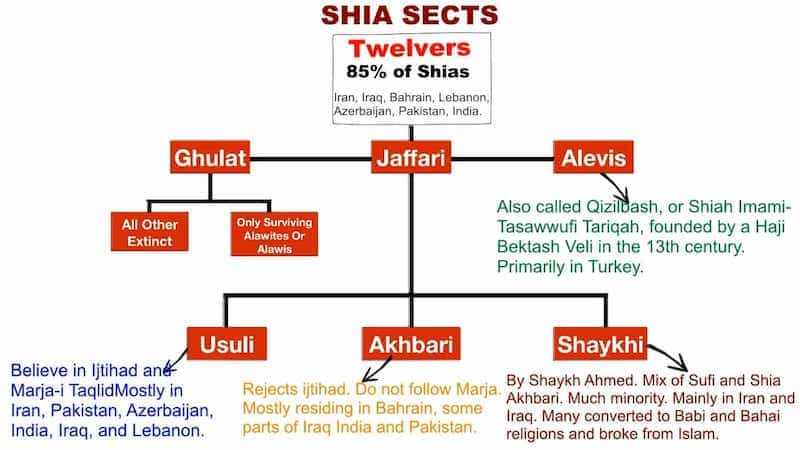 Zaydis are the Fivers as they split from main Shia group on the death of Ali bin Hussein Zainul Abidin as instead of considering Muhammad Baqir as Imam they consider Zayd s/o Zainul Abidin as the 5th Imam. They believe that a true Imam should be from the progeny of Fatima thru Hassan and Hussein and must fight against corrupt rulers. And because Muhammad Baqir kept himself away from politics and Zayd bin Ali rebelled against Ummayad they consider him Imam. Other famous Imams were Yahya ibn Zayd, Muhammad al-Nafs al-Zakiyya (great grandson of Hassan). Zaydis do not believe in the religious taqiyya concealment and infallibility of Imams and are closest to Sunnis specially Hanafis in their doctrine.  They form the second largest Shia group after Twelvers and mostly live in Yemen making up almost 40% of Yemen Muslim population and nearly one million in Saudi Arabia. The famous book by Zayd bin Ali is Majmu’ al-Fiqh. Previous dynasties of Zaydis influence were لأدارسة Idrisid in Morroco and Rassids in Yemen. Currently, the most prominent Zaidi movement is Houthis movement in Yemen, also known as Ansar Allah and Shabab Al Mumineen.

And if God willed, He could have made them one community, but He admits whom He wills into His Mercy. And the wrongdoers have no protector or helper.

Say, “He is All-Capable to send upon you punishment from above you or from beneath your feet or to confuse you into sects and make you taste the violence of one another.” See how We explain the Signs so that you may understand.

But your people have denied it, while it is the truth. Say, “I am not a manager over you.”

For every news is a fixed time, and soon you will know.