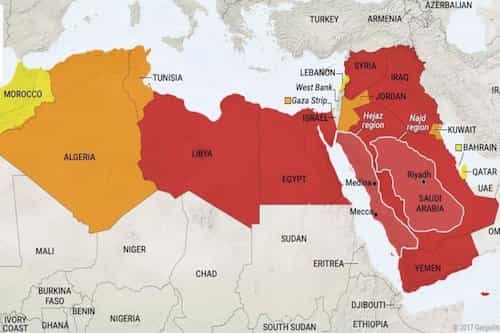 Now a brief introduction of the Salafi doctrine. Salafism is a Religious movement started in Egypt in the late 19th century or according to other sources, it is related to the 18th century Wahabi movement in Hejaz. Its name derived from its reliance on the tradition of Salaf the first three generations of Muslims i.e Muhammad’s Sahabah (companions), Tabi’un their successors and Taba Tabi‘in the successors of the successors. It has three type of followers. Those who avoid politics, others who actively participate and some indulge in Jihadist activities. Also divided among those who utterly reject Taqlid or following any of four major Islamic schools and some who accepts Taqleed and these are the one mostly inspired by Hanbali school.

Mostly Salfis reside in Saudi Arab almost 23% of population, Qatar 47%, UAE 45% and 3-6% in Bahrain and Kuwait. Salafis believe that Salafism is not a modern movement but date back to the first few generations of Islam and for that, they rely on some past quotes mentioning the word Salafia. Many think Wahabi founders to have been Salafis. Also, Ahl e Hadith are considered as a modified version of Salafism and Wahabism. West thinks that Salafi and Wahabi groups are involved in the support and supply of arms to militant jihadist groups around the world.