Coming back to the Sunni sub-sects they can broadly be divided into five. Although there are further divisions in each of them. 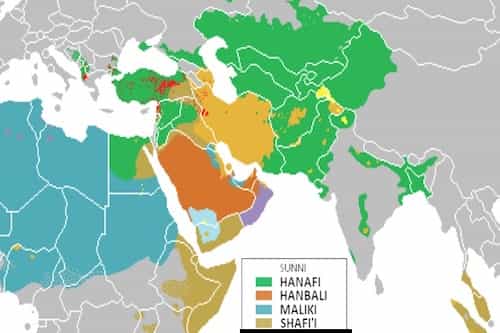 Starting from the Hanafi Sunni, a subsect of Sunni Muslims based on Jurisprudence founded by Numan bin Thabit famous as Abu Hanifa. He was born in Kufa Iraq during Ummayyah rule in 699Ad and died in the early Abbasid rule in 767AD at the age of 67. A merchant by profession he spent 50 years in Ummayad rule and 17Years in Abbasids. He remained a student of Jafar Sadiq. This Sunni sect has the largest number of followers and was the doctrine of most major Muslim dynasties in the history. The foundational texts of Hanafi school are books credited to Abu Hanifa and his students Abu Yusuf and Muhammad al-Shaybani. This includes Al-fiqh al-Absat a book on jurisprudence, Al-fiqh al-Akbar a theological book on jurisprudence, Kitab al-Athar 70,000 hadiths with commentary, Kitab al-Kharaj and Kitab al-Siyar on war, spoils and taxation. Other important Hanifi books are Usul al-Fiqh by Abu Yusuf, الهداية في شرح بداية المبتدي,Al-Hidayah fi Sharh Bidayat al-Mubtadi  known as simply Al-Hidayah by  برهان الدين المرغيناني Burhan al Din al Marghinani., Fatawa-e-Razvia by Ahmed Raza Khan Barelvi, Faizan e Sunnat by Muhammad Ilyas Qadri.

Hanafi later divided into subgroups like Barelvis and Deobandi.

Then comes Maliki Sunni. A sub-sect of Sunni Muslims based on Jurisprudence founded by an Arab Muslim jurist, theologian, and hadith traditionist Malik bin Anas. He born in Madina in 711 and died in 795AD. He was also the teacher of Abu Abdullāh Muhammad bin Idris al-Shafi. His most famous work is Muwatta, oldest and most revered Sunni hadith collections and the first legal work to incorporate and join hadith and fiqh together. Maliki considers consensus of the people of Medina to be the most valid source of Islamic law. Malikis enjoyed more success in Africa, and for a while in Spain and Sicily. In Spain Andulus under Ummayah remnants. After Andulus lost, then they remained dominant in North and West Africa. This is also a preferred school in Gulf states like Bahrain Dubai and Kuwait. Saudi’s in general follow Hanbali Law, but Maliki has some influence in its eastern province. Maliki prioritizes sharia judgments as follows. First to consult is Quran then follows Hadith, if no answer available then “Amal”. Which are customs, practices of the people of Medina, the opinion of Sahaba and consensus of Sahaba (Companions of Prophet). Then Qiyas i.e deductive analogy to arrive at a new injunction. Then Istislah i.e interest and welfare of Islam and Muslims and lastly Urf i.e custom and knowledge of society if not contradicting with all above. Important Maliki books other than Muwatta are Al Mudawanna by Sahnun and Al Risalah by Ibn Abi Zayd Al-Qayrawani.

Then comes Shafii Sunni. A sub-sect of Sunni Muslims based on Jurisprudence founded by Palestinian-Arab Muslim theologian Abu Abdullah Muhammad bin Idris al-Shafii born in 767AD and died in 820AD. He was the most prominent student of Malik bin Anas. His famous books are Kitab ar-Risala fi Usul al-Fiqh on the principles of Islamic jurisprudence, Musnad al-Shafii a hadeeth collection and Kitab al-Umm on his fiqh of Islam. Among Shafii famous followers were Al-Suyuti, Ibn Hajar, Ibn Kathir and Ghazali. The Shafii school now present in Somalia, MiddleEast, Indonesia, Malaysia,  Parts of India, Singapore, Myanmar, Thailand, Brunei, and the Philippines.

Then comes Hanbali Sunni. Again a subsect of Sunni Muslims based on Jurisprudence founded by an Arab Muslim jurist and theologian Ahmad bin Muhammad bin Hanbal Abu Abd Allah al-Shaybani born in Iraq in 780Ad and died in 855AD. He was a student of Al-Shafii. His famous works are Musnad Ahmad ibn Hanbal a collection of Hadith and Kitab al-Sunna. Hanbali school became somewhat controversial after Wahabi-Salafi movement which is said to be influenced by this school and its 13th-century reformer Ibn Taymiyyah. Hanbali school is the smallest of four major Sunni schools. It is found primarily in Saudi Arabia and Qatar. Also many followers in UAE Bahrain, Oman, Yemen and Iraq.

Then comes Zahiri Sunni. Zahiris in some regions also considered as the fifth sect of Sunni Muslims based on Jurisprudence founded by Dawud al-Zahiri. Born in 815Ad and died in 884AD. Then established by Sufyan al-Thawri and Ishaq Ibn Rahwayh and get much recognition by Ibn Hazm 994 to 1064 AD. This school relies on apparent meaning of the expression in Quran and rejects Qiyas or deduction. They believe that validity of religious issues is only upheld by certainty, and that speculation cannot lead to the truth and if it were possible to draw more conclusions from the reading of scripture, then God certainly would have expressed these conclusions already. Thus, all that is necessary lies in the text. Ahl-i Hadith somewhat identify themselves with the Zahiri school of thought and even Salafi and Wahabi movements have traces of it. 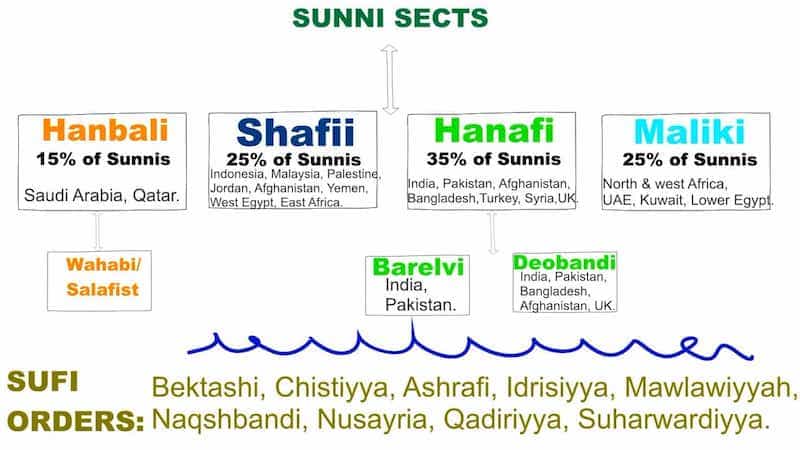 The heavens almost break from above them, and the angels exalt [God] with praise of their Lord and ask forgiveness for those on earth. Unquestionably, it is God who is the Forgiving, the Merciful.

And those who take as allies other than Him – God is [yet] Guardian over them; and you, are not over them a manager.

And if God willed, He could have made them [of] one religion, but He admits whom He wills into His mercy. And the wrongdoers have not any protector or helper.