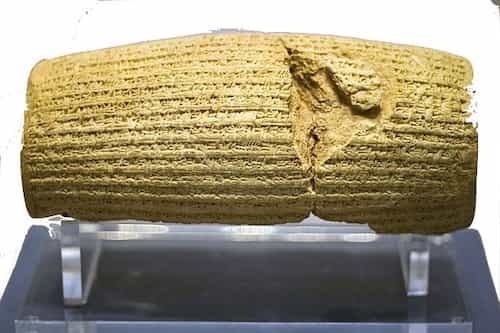 The Cyrus Cylinder or Cyrus Charter is an ancient clay cylinder, now broken into several pieces, on which is written a declaration in the name of Persia’s Achaemenid king Cyrus the Great. In 1879 Hormuzd Rassam found a small clay cylinder about nine inches long. It dated from the 6th century BC and was discovered in the ruins of Babylon in Mesopotamia (modern Iraq). It is currently in possession of the British Museum, which sponsored the expedition that found the cylinder. It was created and used as a foundation deposit following the Persian conquest of Babylon in 539 BC when the Babylonian was invaded by Cyrus.

I returned to these sacred cities on the other side of the Tigris, the sanctuaries of which have been in ruins for a long time, the images which used to live therein and established for them permanent sanctuaries.

The policy often hailed as Cyrus’s Declaration of Human Rights coincides perfectly with the biblical account of the rulers actions in which Cyrus decreed that the Temple in Jerusalem would be rebuilt and that all the exiled Israelites who wish to join in the venture had his permission and blessings to do so. You would read that in Ezra 1:1-11 as mentioned below. This little 9-inch long clay cylinder stands as impressive testimony that validates the biblical accuracy. This proves that the Bible is a historically accurate book ever penned and hundreds of ancient discoveries verify its accuracy.

In the first year of Cyrus king of Persia, in order to fulfill the word of the LORD spoken by Jeremiah, the LORD moved the heart of Cyrus king of Persia to make a proclamation throughout his realm and also to put it in writing: “This is what Cyrus king of Persia says: “ ‘The LORD, the God of heaven, has given me all the kingdoms of the earth and he has appointed me to build a temple for him at Jerusalem in Judah. Any of his people among you may go up to Jerusalem in Judah and build the temple of the LORD, the God of Israel, the God who is in Jerusalem, and may their God be with them. And in any locality where survivors may now be living, the people are to provide them with silver and gold, with goods and livestock, and with freewill offerings for the temple of God in Jerusalem.’ Then the family heads of Judah and Benjamin, and the priests and Levites—everyone whose heart God had moved—prepared to go up and build the house of the LORD in Jerusalem. All their neighbors assisted them with articles of silver and gold, with goods and livestock, and with valuable gifts, in addition to all the freewill offerings. Moreover, King Cyrus brought out the articles belonging to the temple of the LORD, which Nebuchadnezzar had carried away from Jerusalem and had placed in the temple of his god. Cyrus king of Persia had them brought by Mithredath the treasurer, who counted them out to Sheshbazzar the prince of Judah. This was the inventory: gold bowls, 30 matching silver bowls, 410 other articles, 1,000. In all, there were 5,400 articles of gold and of silver. Sheshbazzar brought all these along with the exiles when they came up from Babylon to Jerusalem.   Ezra 1:1-11 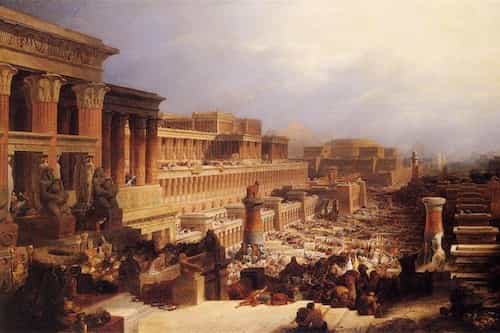 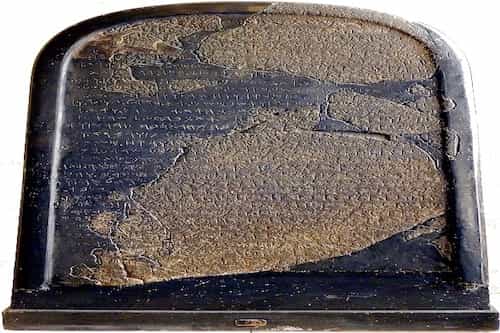