Skip to content
Quran Prediction: There Are Signs In The Story Of YusufTheLastDialogue

SIGNS IN THE STORY OF YUSUF

Certainly were there in Joseph and his brothers signs for those who ask,   Surah Yusuf 12:7

It is narrated in traditions that this Surah was revealed as a reply to a question which Meccans asked Prophet  Muhammad on the advice of a Jew regarding Prophet Yusuf and the reasons of Israelites coming in Egypt as a test to make him embarrassed. As till then Prophet never narrated any Surah of Quran mentioning Josephs/Yusuf’s name or story and the point is to expose him as Arabs were also not aware of the story of Prophet Yusuf/Joseph before that.

There Are Signs In The Story Of Yusuf 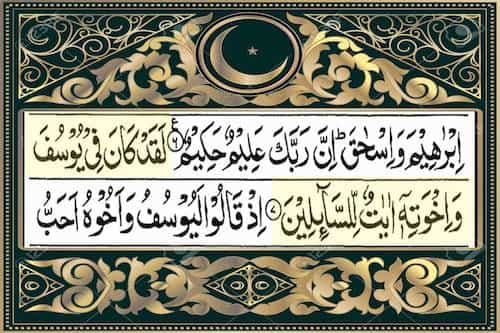 That’s why Surah Yusuf started with that, and in verse 7 it is stated that there are signs in this story for those asking. This verse is a miraculous verse of the Quran not only in its Prophecies but also in its number 7. I tell you how. There are seven 7 Prophecies in this verse 7 of Surah Yusuf. As also indicated by the word “ آيَاتٌ” used here as a plural i.e “signs.” And history proved that all signs have fulfilled. I am narrowing down these miraculous signs as:

5- Fifth: As Yusuf gained power there in Egypt and God raised him as a ruler/governor, Muhammad who was under persecution in Mecca and very weak and helpless, Just in a few months after migration to Madina becomes a spiritual and political leader.

6- Sixth: Just like Yusuf came victorious and dominant over his brothers Prophet Muhammad only in 10 years Conquered Mecca and dominated over them.

7-Seventh: Last but not the least Just like in Verse 91-92 Yusuf brothers asked forgiveness, and Yusuf forgave them, at the time of the conquest of Mecca Prophet asked the Meccans “What treatment do you expect from me now?” They replied, “You are a generous brother and the son of a generous brother.” Prophet replied “I will give the same answer to your request that Joseph gave to his brothers that, no reproach upon you today. May Allah forgive you; and He is the Most Merciful of the merciful.

The sixth word of verse 12:7 is an indefinite feminine plural noun and is in the nominative case مرفوع. The noun’s root is hamza yā yā (أ ي ي). This root occurs 382 times in the Quran as the noun āyat (ءَايَة).

(أ ي ي): “Ii” إي Particle: Verily; Yes; Yea; Aye; Of course; Used in affirming by oath. A particle denoting a reply meaning “Naam” نعم (yes or yea) ; importing acknowledgement of the truth of an enunciation and the making a thing known to him who asks information. “Ayyu” اَىُّ Who, which, whichever, ايهم اخوك Who or which of them is thy brother. “Âyatun” آية A sign, token or mark by which a person or thing is known; a message or communication sent from one person to another; the body of a man; that which one sees from a distance; a person or an individual; a whole company of people, Verse of Quran, Surah, miracle; a sign as meaning an indication; an evidence or a proof; an example or a warning.

1 Kings 12:19 Miracle: So Israel has been rebellion against house