Skip to content
Battle of Siffin-2. The aftermath and impact on Muslim history.TheLastDialogue

Battle of Siffin-2: The Beginning of the Battle, aftermath and impact on Muslim history.

Do you consider giving water to pilgrims and maintaining the Sacred Mosque the same as believing in God and the Last Day and striving in God’s path? They are not equal in God’s sight. God does not guide the unjust people.

Those who believe, emigrate and strive in the way of God with their wealth and their lives are greater in rank in the sight of God. And they are the successful.

Their Lord announces to them the good news of mercy from Him, and acceptance, and gardens wherein they will have lasting bliss.

They will abide in it forever. Indeed, with God is a great reward.

Preparation of the Battle

In Part 30 of this dialogue, I told you about the battle of Jamal and then moved towards Muawiya who raised the entire country of Syria against Ali. Despite many efforts of negotiation by Ali the same year in July 657 AD the battle of Siffin took place between Ali and Mauwiya at Siffin on the banks of the Euphrates river, in what is now Raqqa in Syria. The two armies camped themselves at Siffin for more than one hundred days. 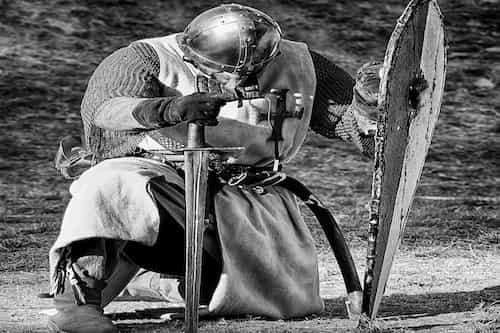 Battle of Siffin: The Main Engagement

Ali had 80,000 men, including 70 Companions of prophet who participated in the Battle of Badr, 70 Companions who took oath at Hudaibia, and 400 prominent Ansars and Muhajirun; while Muawiya had 120,000 Syrians. In 100 days Ali’s forces lost 25,000 men, while Muawiyah’s forces lost 45,000 soldiers. When a senior companion of Prophet Ammar bin Yasir fighting as a commander from Ali’s side killed by Syrian forces this created a great chaos is Syrians as there was a definite saying of Prophet that Ammar would be killed by an evil rebellion party and that Ammar would be inviting them towards good while they would be inviting him towards Hellfire. Seeing this Abdullah son of Amr bin Aas told his father this saying which then Amr bin Aas told to Mauwiya. Hearing this Mauwiya asked Amr to be silent on this, and not to let others hear the tradition of the Prophet, and he created a new logic that Ammar had actually been killed by Ali who brought him into the battle. Later when Ali came to know about this he replied that if he killed Ammar then Muhammad is the one who murdered Hamza bin Abdul-Muttalib.

After Ammar’s martyrdom Ali sent a message to Muawiya and challenged him to single combat, generously proposed to save the blood of the Muslims saying that whoever won should be the Caliph. Mauwiya declined and when Amr bin Aas his right hand asked him to do so he replied have you ever seen anyone fighting Ali and lived. 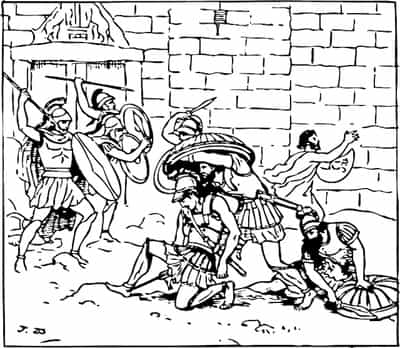 Quran on swords and Arbitration

The next day army of Syria was about to be defeated because of the attacks made by Ali’s General Malik al-Ashtar. Seeing a complete defeat On the advice of Amr bin Aas the army of Muawiya put up copies of Qur’an on their swords, as a sign of agreeing that Qur’an be the arbiter in settling their dispute. This caused a division in the army of Ali. Some wanted to fight others not. Ali told them that this was but a deception, but ultimately, he had to accept the arbitration of the Quran. Ali proposed Abd Allah bin Abbas or Malik al-Ashtar as his arbiter and suggested Ahnaf bin Qays as a second choice or as assistance, but some people did not accept his recommendations and imposed Abu Musa al-Ashari to Ali as an arbiter. On the other hand people of Syria named Amr bin Aas as their representative for arbitration.

Result of the Arbitration

The two arbiters decided removal of both Ali and Muawiya and the election of the Caliph by a council. Amr bin Aas asked Abu Musa to announce the result of the arbitration ahead of him. Thus Abu Musa Ashari announced the removal of Ali, but when it came to Amr bin Aas instead of announcing the removal of Muawiya, he confirmed the dismissal of Ali and appointed Muawiya as the Caliph. Following this, there was a fight between these two arbiters and they abused and cursed each other. The two armies had already stopped the battle and Syrians and Mauwiya were successful in escaping the inevitable defeat of their army. After this, in later years Ali tried to attack Syria again, but people of Iraq and other areas did not comply with his orders.

The aftermath of battle of Siffin

Battle of Siffin, raising Quran on swords and this arbitration caused great division in Ali’s army. At that time Ali told his people that this act of bringing Quran is a conspiracy but a part of his people forced him for this arbitration. Those people called as Qurra i.e Quran readers, named so for their literalist reading of the Quran and their extreme and militant devotion to it. They broke away from Ali’s army and formed their own party called Kharijite those who exit OR the outsiders. Thus started the Battle of Nahrawan in 658 AD at Nahrawan few KM from Baghdad between Ali and the Kharijites commanded by Abdullah bin Wahb al-Rasibi which ended in a total defeat of the Kharijites. The Kharijites that survived the battle against Ali managed to flee to Basra, Sistan, Khorasan, Oman, Yemen, and elsewhere, where they had their offspring, spread their beliefs and recruited more followers. Three years later In 661 AD Ali is assassinated by a Kharijite called Abd-al-Rahman ibn Muljam and is buried in Najaf, Iraq.