QURAN ON MOTION OF SUN

Quran Tells A Heliocentric Cosmos With Sun In Motion

In past scientists believed that the Earth stood still in the center of the universe and Sun, stars and everything else revolved around it. Then Copernicus told the Heliocentric Theory which says that the Sun is motionless at the center of the solar system with the planets revolving around it. Then we came to know that planets not only revolve around the Sun but also rotate around their own axis. Now we know that our Earth rotates around its axis at 1600km/hr, which causes day and night on Earth. Then it revolves around the Sun at 107,000km/hr which is responsible for our 12 months year and different seasons on Earth.

The Sun is also not stationary but is in motion with a speed of 800,000 km/hr in the direction of the bright star Vega in the constellation of Lyra along with all the solar system including planet earth and our moon. It takes our Sun approximately 225 million years to make the trip around our Galaxy. This is sometimes called the galactic year. Since the Sun formed, about 20 Galactic years have passed; we have been around the Galaxy 20 times. The Sun also rotates around its own axis with a speed of 7000 km/hr and takes 24 days to complete this rotation. This knowledge is very recent, and only 100 years back scientists believed that the Earth revolved around a stationary sun.

Quran Miracle As It Says Sun Is Not Stationary

But Quran almost around 1400 years ago told us that the Sun is also not stationary and also tells about the movement of planets, Earth and all celestial bodies in space and also around their own axis.

And the sun runs its course for a term and place appointed for it. That is the decree of the All-Mighty, the All-Knowing. Surah Yasin 36:38 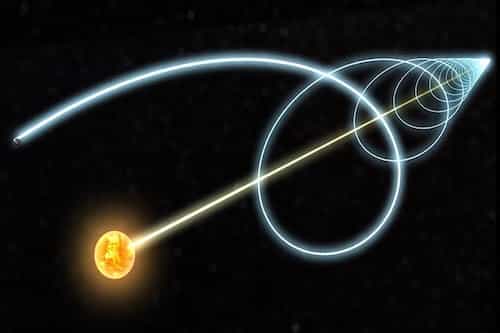 For many years critics mocked at these verses, claiming that it explained the doctrine of Geocentricity i.e the Sun revolves around the Earth. Scientists at that time thought the Sun was stationary. However, it has been discovered in recent years that the Sun is, in fact, moving through space as I mentioned above and it is traveling through the heavens and has a فَلَكٍ  “Orbit” just as the Quran says. Its orbit is so large that it would take approximately 225 million years to complete one orbit.

The Arabic words used in these verses are فَلَكٍ and يَسْبَحُونَ which means the “Sky / Orbits” and “Swim without sinking” respectively. The Arabic word يَسْبَحُونَ derived from the root word س ب ح and its detailed meaning is given below in “DETAILED ANALYSIS OF THE IMPORTANT WORDS” section. It has in it the meaning of motion not only related to swimming in orbits but also contains the meanings of motion within itself i.e rotation around the axis. Which we now know that the Sun also rotates around its own axis with a speed of 7000 km/hr and takes 24 days to complete this rotation.

Also in Surah Yasin verse 38 Quran tells exclusively about the motion of sun in the universe and used the word “تَجْرِي لِمُسْتَقَرٍّ” for this which has in it a sense of both “Running for its fixed term” and “Running towards its appointed place” that’s why I translated it as “sun runs its course for a term and place appointed for it” which gives us a sense that all these celestial bodies also have a life span and not eternal and they will end their life at some appointed time and place in the universe. Despite what we observe from our everyday experience and the feeling that the sun and planets they just move around same orbits, the fact of matter is that at the same time we are also traveling in space and every other morning the sun never rise from the place it rose a day before but at billions of kilometers distance from that as I clearly mentioned in detail in my article “How fast we are traveling when sitting still”. Just during this conversation of 2 minutes we have traveled almost 120,000 km and left that area where we were just 2 minutes ago.

There are other verses also explaining the same thing as mentioned below:

It is not allowable for the Sun to reach the moon, nor does the night overtake the day, but each, in an orbit, is swimming. Surah Yaseen 36:40

The third word of verse 36:38 is divided into 2 morphological segments. A preposition and passive participle. The prefixed preposition lām is usually translated as “for”. The indefinite form X passive participle is masculine and is in the genitive case مجرور. The passive participle’s root is (ق ر ر). Together the segments form a preposition phrase known as جار ومجرور. This root occurs 38 times in the Quran, in eight derived forms.

(ق ر ر): To be or become cool, remain quiet, be steadfast, be firm, refresh, be stable, be firm, receive satisfy, affirm, agree, settle, last.Qarâr قرار :Stability; A fixed or secure place; Depository; Place ahead. Qurratun قرة Coolness;Delight. Aqarra اقر: (IV). To confirm, cause to rest or remain. Istaqarra استقر(X).To remain firm. Mustaqirrun مستقر :That which remains firmly fixed or confirmed, in hiding, is lasting, which certainly come to pass, which is settled in its being or goal or purpose. Mustaqar مستقر  Firmly fixed or established; A fixed abode, sojourn; Abode. “Qarar” also means a place where one resides; a place where one gets quiet and peace; a depressed piece of ground; or a depressed piece of land where water rests; a place where water rests in a meadow; a point on which agreement is reached/ “Qarri” “Qarra” Cool like cool your eyes, Plentiful & Pleasant state of life. “Qarora” Plural  “Qawareer” glass or crysta(as in 76:15) the black of the eye; the part of the eye that is surrounded by the white; a woman or wife; a receptacle for fresh or dried dates. 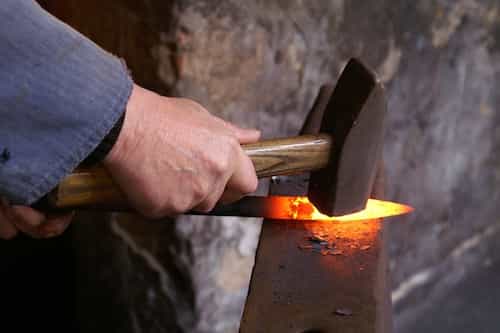 Quran Miracle: Iron Does Not Belong To Earth