Skip to content
The Mighty Mongol Empire And Its IslamizationTheLastDialogue

The Mighty Mongol Empire And Its Islamization

Also read Was Abu Talib A Muslim, Root cause of Division, Uthman, Battle of Jamal,  Siffin 1, Siffin 2 , Karbala , Umayyads to Ottomans And Major Muslim Empires before or in conjunction with this article.

Before going to Mughals rule in sub-continent let me discuss here the Mighty Mongol Empire. Because it is this Mongol era which caused an irrecoverable loss to Muslims. But ultimately gave birth to the second phase of Islamic dominance in the region. And Mughal Emperors of sub-continent were actually descendants of Ganges Khan.

The Rise Of Genghis Khan 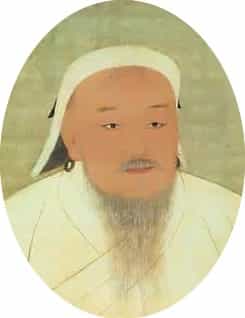 The  Mighty Mongol Empire was founded in 1206AD by Temujin known as Ganges Khan.  In 1125AD China, The Jin Dynasty overthrew Liao dynasty also known as Khitan Empire as it was mostly comprised of Khitan people. Jin rulers known as golden kings followed the same policy of divide and rule as Liao Khitan empire did for Mongolian Zubu tribes. A common name of Mongol tribes among which most known were Khamag Mongols and Tatars. When Temujin great grandfather’s successor Ambaghai Khan betrayed by Tatars and they handed him over to Jin dynasty. 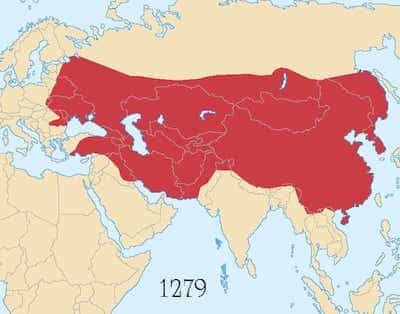 Mongol attacked Tatars and get defeated by Jin and Tatar armies in 1161Ad. Then there were many tribal wars and in this vacuum and chaos in 1189 Temujin became the Khan of Khamag Mongols and later because of his policy of sharing all war spoils with his soldiers rather than only with elites and because of adapting people of the conquered territory in his tribe, he got great power and support. But simultaneously it also caused a rift and dissatisfaction within tribe and elders thus resulting in a war after which he defeated all rivals, unified all nomadic tribes and assumed the title of Genghis Khan the universal leader. He led campaigns in every direction overthrowing Jin in China, Tibet, qara Kitai and west to central Asia and Persia and Caucus thus founding the largest Land empire in the history.

The Fall Of The Mongols 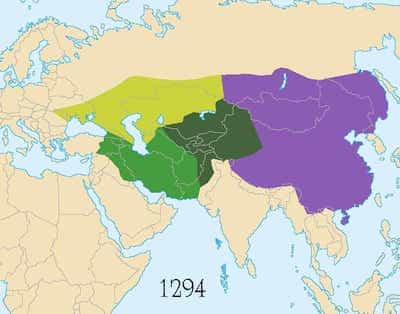 After his death in 1227AD, Ogedei his third son became emperor as he was already named by Ganges. After Ogedei death in 1241 AD the empire split due to dispute whether the royal line should follow from his son and initial heir Ogedei or from one of his other sons, such as Tolui, Chagatai, or Jochi. After ten years of chaos and bloodshed The Toluids prevailed and Touli son Mongke Khan become ruler and rules from 1251-1259AD. After Mogke death there was again a chaos and in 1260 Kublai Khan fourth son of Tolui became the 5th Khagan Emporer of Mongol empire. He also established the Yuan dynasty in China in 1271AD. He ruled as the first Yuan emperor till his death in 1294 AD.  By the time of Kublai Khan’s death, with no accepted Khan in existence,  the Mongol Empire was divided into four separate Khanates or empires.  The Golden Horde consisting of Russia, Ukraine, Black Sea region, the Caucasus. The Ilkhanate of Iraq and Persia. The Chagatai Khanate consisted of 5 Central Asian republics and the Yuan dynasty China. Out of these four empires or Khanates excluding the last one, all others converted to Islam.

Islamisation of the Mongol Empire

As I already told you that Mongols had caused much loss to the Islamic World. So much so that the word holocaust has sometimes been used to describe it. Under Mongke Khan rule he sent his brother Hulagu Khan to conquer Persia, Syria, Egypt and to destroy the Abbasid Caliphate and to establish the Ilkhanate of Persia, a precursor to the eventual Safavid dynasty, and then the modern state of Iran. In the 1258AD siege of Baghdad, He plundered looted and put on fire the rich Islamic culture of that time and pushed Islamic civilization in dark ages. But from the ashes of this destruction rise the eventual Islamisation of the entire Mongol Empire, outside of China and Mongolia. This is what I always say to you That God has its own way of doing things and if you do not change yourself, He will replace you by another people. 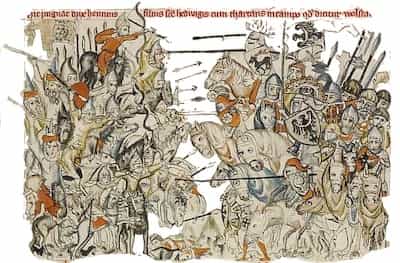 The shift towards Islam came after the death of Kublai Khan who was the grandson of Ghengis Khan and the last Great Khan. The first to convert was Berke Khan, Khan of the Golden Horde and son of Jochi Khan, the eldest son of Genghis Khan. He also persuaded his brother Tukh-Timur to convert to Islam as well. When Hulagu Khan looted Baghdad and overthrown Abbasid Caliph Al-Mustasim. Berke being a newly devoted Muslim decided to deal with Hulagu whose brother Mongke Berke helped make Great Khan in 1251. But soon after the sack of Baghdad in 1258 Mongke dies in 1259 and Hulagu had to return Mongolia to elect a new Great Khan. In his absence Mamluk of Egypt defeated the remaining Mongol army and when Hulagu came back in 1261 Berke allied with Mamluks and completely halt Mongol expansion in the middle east.

Despite Berke Khan conversion to Islam Berke Khan’s Golden Horde still hung to Original Mongolian religion and Buddhism, till Oz-Beg convert to Islam, took the throne in 1313, and adopted Islam as the state religion in 1315AD.

Now the second empire Chagatai Khanate, comprised of what are today’s

5 Central Asian republics had a ruler Mubarak Shah who converted to Islam in 1256AD same like Berke Khan. But the later rulers of empire converted back to original religion. Later when Tarmashirin Khan in 1331AD tried to take back the empire to Islam he was killed and the Khanate collapsed and later took over by Timur who converted all territories under his rule to Islam.

In the third empire, the Ilkkhanate of Iraq and Persia, Ghazan was the first ruler to convert to Islam in 1295AD. By the time of Ghazan, Islam had become popular in the Mongol dynasty. By AD 1330s three of the four major khanates had converted to Islam. The fourth one Yuan dynasty China – converted to Buddhism, not to Islam.

If my Lord Wills, I Will continue this in next Program.

Recitation of the Holy Scripture

To replace them with better than them; and We are not to be outrun.

So leave them to converse vainly and amuse themselves until they meet their Day which they are promised.

The Day they will come out from the graves rapidly as if they were hastening to a goal.

Their eyes humbled, humiliation will cover them. That is the Day which they had been promised.