Differences in Comets, Asteroids, Meteoroids, Meteors and Meteorites. What is an impact crater. 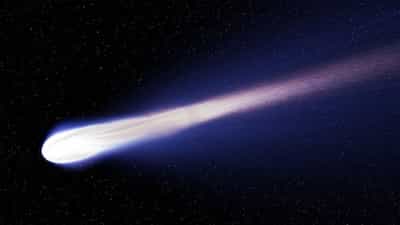 Now let me explain to you the differences in Comets, Asteroids, Meteoroids, Meteors and Meteorites.

What is a comet? Parts of a Comet.

Starting from Comets, they are Small icy pieces with other volatile material mixed with solid grains. Comets found in 2 main places in solar system Kuiper Belt at 45AU from the sun, which I told you in part 20 and in Oort Cloud at a distance of 50000AU. The Key Nucleus of Comet is mostly 1-10Km diameter consists mainly of ice and dust coated with dark organic material. While its Coma the cloud of gases that forms around the nucleus can be about 100,000Km. These gases are usually a mixture of water vapor, ammonia and carbon dioxide. A comet has two tails one made by coma a hydrogen envelope which is transparent and can reach nearly 10million km across and second its Iony tail which can go about 100million km. Comet becomes comet because of the solar heat and not because of Earth atmosphere. It becomes a comet with the tail when it enters in the solar system. The tail is always opposite in the direction of the sun because of solar winds i.e tail is behind comet when it is coming towards the sun and is in front of the comet when it is going away from the sun. Halley’s Comet is a short period comet returning after every 74-79 years since 239BC

Asteroids are small rocky objects with less volatile materials that orbit the Sun. There are currently over 600,000 known asteroids in our solar system. Most of them found in Asteroid Belt between Mars & Jupiter at 2.2 to 3.3AU. Current theory suggests that asteroids are planetesimals, the building blocks of planets, that were never combined into one of the eight planets in our solar system. Some asteroids are blown out comets. When the ice is gone, all that remains is the rocky material. An asteroid impact around 65 million years ago caused the extinction of the dinosaurs and affected all life on Earth. 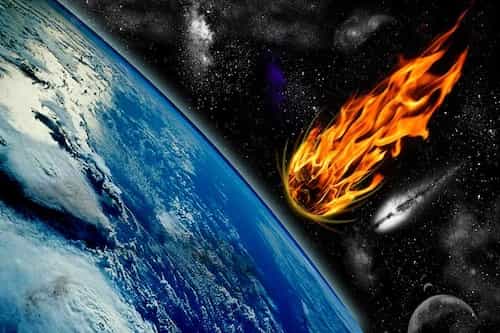 Celestial objects smaller than about 25 meters will most likely burn up as they enter the Earth’s atmosphere and cause little or no damage. Every day, Earth is bombarded with more than 100 tons of dust and small particles. About once a year, a small rock-sized asteroid hits Earth’s atmosphere, creates an impressive fireball, and burns up before reaching the surface. Almost in every 2,000 years, a meteoroid the size of a football field hits Earth and causes significant damage to the area. And once in a few million years, an object large enough to threaten Earth’s civilization comes along. Impact craters on Earth, the moon, and other planetary bodies are evidence of these occurrences.

What are Meteors, Meteoroids, and Meteorites?

Now coming to Meteorides, they are any small particle from a comet or asteroid orbiting the Sun. So they are fragments from Asteroids or Comets. Meteor is the light phenomena which result when a meteoroid enters the Earth’s atmosphere and vaporizes, simply a shooting star. So in simple words, Meteoroids that enter earth’s atmosphere are called Meteors. Lastly, a meteoroid that survives its passage through the Earth’s atmosphere and lands upon the Earth’s surface is called Meteorite. So Meteorites are Meteoroids that hit the earth. The place where that Meteorite hit is called IMPACT CRATER. We get a Meteorite Shower when the earth passes thru the place where a comet has passed from earth orbit as comet continuously giving off material gas & dust.